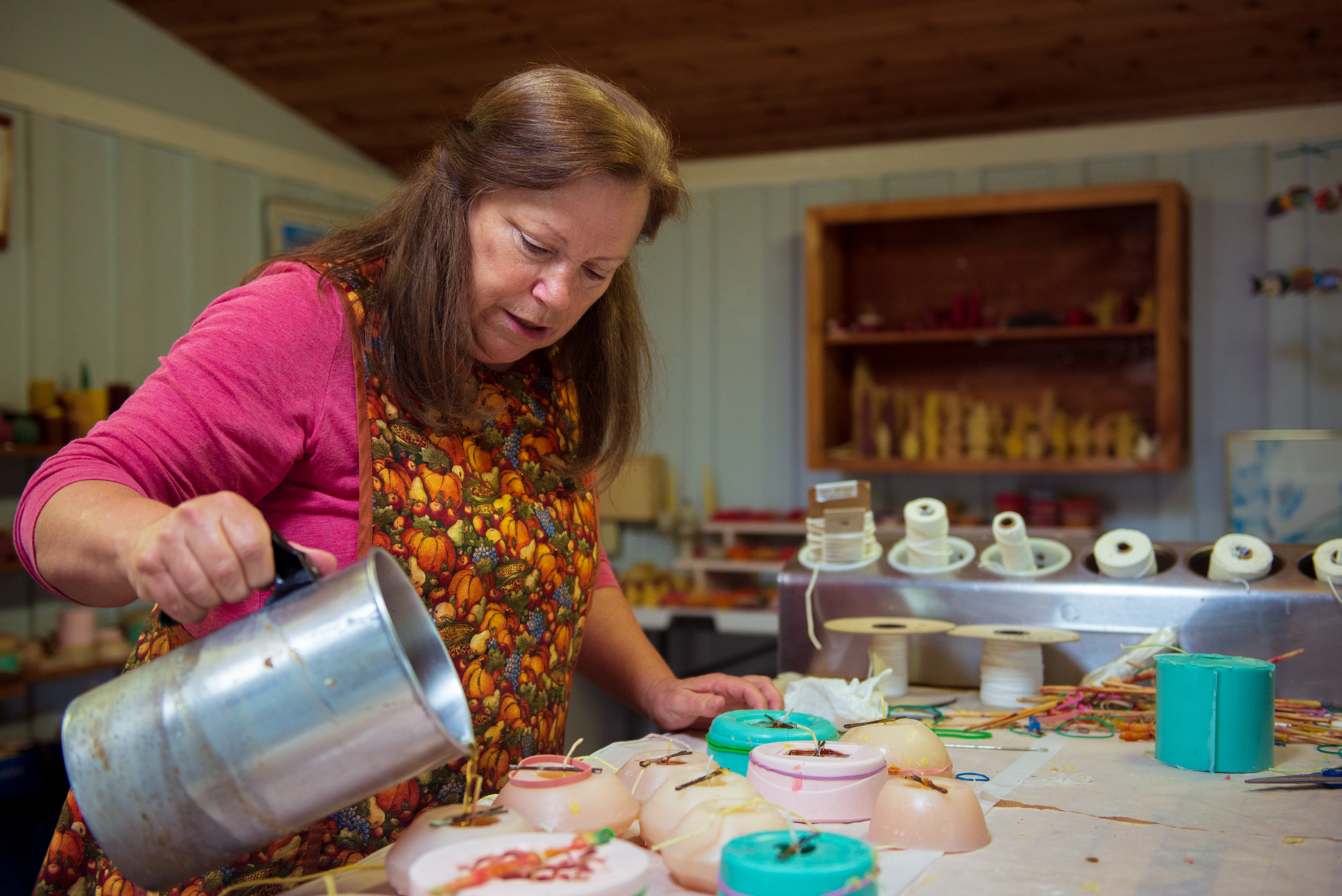 On a recent Tuesday morning, Suzanne Sicard held up a rock. It was slate gray in color, fit snugly in the palm of her hand, and it had a perfectly trimmed candle wick sticking out of it.

“It’s in the ugly candle category,” she said. “So it’s not too pretty to burn.”
Suzanne, who goes by Suzy, hand-makes pure beeswax candles of all shapes, colors, sizes and smells at her home in Cutten. In addition to her rocks, which are best-sellers around the holidays when they are black and pass for lumps of coal, Suzy’s candles include pineapples, dahlias, ghosts, stars, apples, grapes, chickens, mushrooms, owls, bears, fall leaves, and crabs. They’re all made under her company, Rosewood Naturals, with 100% beeswax from custom molds she makes herself.

“I’ve got redwood trees and banana slugs,” she said. “You can’t get those anywhere else.”

Suzy started making beeswax candles when she helped her friends teach a beekeeping class in Freshwater. After they spun out the honey, she noticed a bucket of beeswax with dead bees and sticks in it. She said it’s a golden, beautiful color, and she had to have it.

The first things Suzy made with the beeswax were ornaments out of antique cooking molds, a 500-year tradition of German bakers. She also created hand-dipped tapers. Suzy, who retired from being a court reporter for the State of California six years ago, says her favorite part of candle making—besides the smell—is the creativity and doing something that’s not mundane.

“The good thing with working with beeswax is if you screw it up, you can just melt it,” Suzy said.

Suzy sources all her beeswax from local bees, using around 300 pounds of beeswax every season. She uses 100% natural dyes for color and essential oils for scents, but rarely makes scented candles, as beeswax has a sweet smell on its own. Beeswax candles are cleaner than ordinary candles—most are made out of paraffin, which Suzy says emits toxins in the air. Beeswax emits negative ions which cleanse the air and has the highest melting point of any known wax. It is more dense than other candles and can burn longer with less dripping.

Suzy’s one-of-a-kind candle shapes come from what she sees in nature, bringing back sea shells from her trips to Hawaii or the images of fall leaf colors when she returns from Vermont. She even has candles made from the fossil of a sperm whale tooth.

Her unique candle molds also come from her sense of humor. The skulls she jokingly made around the holidays are now her best sellers. Some of the candle sticks she makes are actual sticks—a piece of petrified wood with small branches. The problem with this, she said, is everything looks like a candle. Recently she saw a pinecone on the side of the road and screeched to a halt to pull over and pick it up.

With floating, multi-colored roses, detailed witches’ hats and intricate coral shapes to choose from, Suzy said there is a common sentiment that her candles are too pretty to burn. (One of her friends won’t burn anything with a face.) But with inspiration all around and no signs of stopping, Suzy says she always has plans for candles to come. She’ll be at various craft fairs, the Friday Night Market in Eureka, and her candles are available to purchase online and at various stores, including the Co-op. And for those who can’t bear to light the wick on such unique, custom candles, Suzy has some advice. “Burn ‘em,” she said. “You know where you can get more.”

Explore the rest of the October 2018 Issue

From Coop to Co-op